I picked Jack up from school and was talking to him about his day on the way home.  I asked him what he did at preschool, and he said “the little mouse went night night”.  Conversations like that make 2 year olds some of the best people to talk to.

I tripped and Jack laughed really hard and followed it up with “mommy so funny”.  He boosts my confidence in life.

The way I hear him talking after he wakes up in the morning or from his nap on the monitor makes my heart smile.  It’s a reminder of how smart he is, and sometimes he’ll throw something in there like “I owe ew mommy”, his I love you, when he doesn’t even know I can hear him.

His ability to climb, crawl, jump, fly, slide, and glide on, through, over, under, around anything is incredibly impressive.  The flexibility and athleticism of 2 year olds is something impressive.

And the emotional status of a 2 year old is only rivaled by that of a young teenage girl.  One minute they’re happy and everything’s great, and the next there are a lot of tears, you can’t understand them, and you’re pretty sure life will never be the same again.  But usually, with just the right combination of pampering and giving them what they want, within five minutes  it’s better.

There’s nothing like spending some refreshing time with a two year old.  Jack’s 2 year old view on life reminds me not to take myself too seriously. 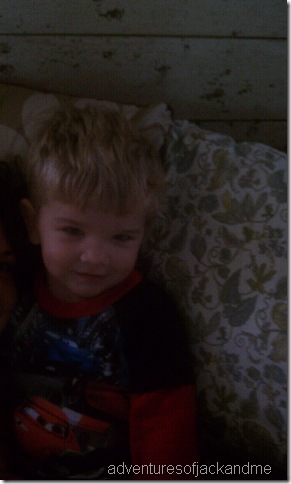